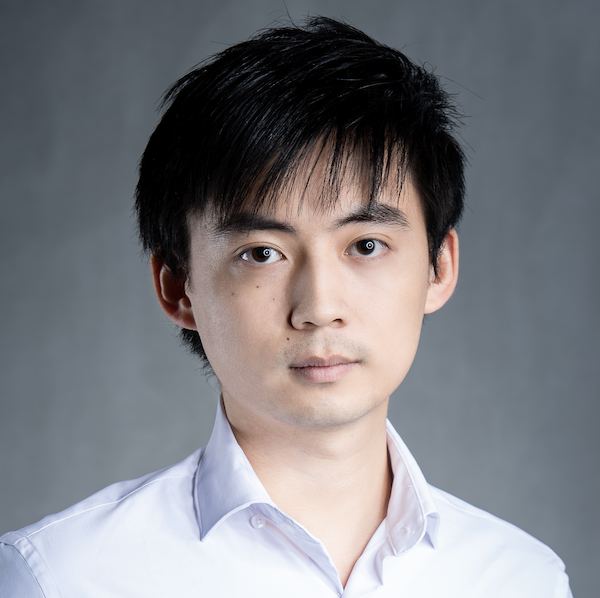 Much has been written lately about the increasing militarization of US law enforcement. One of the most visible indicators of this shift in recent decades is the increased frequency of tactical gear and equipment worn and carried by police officers. However, this pales in comparison to images of police departments bringing armored vehicles to peaceful protests. People often criticize police departments or SWAT teams for owning and deploying tanks in situations that don’t warrant their use. In reality, these ‘tanks’ are typically Mine-Resistant Ambush Protected (MRAP) vehicles. MRAPs were developed by the US military and produced by various manufacturers from 2007-2009. As their name suggests, they are designed to protect passengers from an improvised explosive device (IED) attack.

Given the extreme threat they were designed to survive, MRAPs are emblematic of increasing police militarization in the US. But how did police come to own these military-grade vehicles?

Where have all the MRAPs gone?

Police departments, sheriff’s offices, and even school districts (the LA Unified School District briefly owned an MRAP in 2014 before returning it to the Department of Defense) that possess MRAPs typically acquire them through the little-known 1033 program which transfers surplus military property to law enforcement agencies. The 1033 program is separate from the Department of Homeland Security and Department of Justice grants that agencies use to purchase equipment. In contrast, the 1033 program transfers surplus military equipment directly to law enforcement agencies.

The 1033 program received increased public scrutiny after the highly militarized response to protests in Ferguson, MO after the killing of Michael Brown by Darren Wilson in 2014. Scholars have found a positive relationship between 1033 transfers and police killings.

The National Defense Authorization Act of 1990 established a program to transfer surplus Department of Defense property to “federal and state agencies for use in counter-drug activities” and this was expanded to the 1033 program in 1997 (see here for details). The program was suspended by Obama in 2014 before being restored by Trump in 2017.

The Marshall Project has an online database where you can look up all tactical equipment transferred to every law enforcement agency in the US. However, the sheer scale of the data can easily hinder understanding. MRAPs represent a tiny fraction of the total property transferred to law enforcement agencies, but they are a powerful symbol and can be very easily abused. In addition, their presence can lead peaceful protests to escalate to violence as protesters react to aggressive tactics, so it’s worth exploring how many of them have made their way into the hands of state and local agencies. To try and help illustrate the increasing level of police militarization in the US, I’ve downloaded the data from the Defense Logistics Agency (DLA), which administers the 1033 program.

Below I’ve plotted the total number of MRAPs transferred to law enforcement agencies in each state from 1990 to 2020. It’s important to note that this is not a reflection of the total number of MRAPs in each state as this just count the transfers from DLA to local agencies. It’s possible for agencies to return the vehicles, as LAUSD did, and they may be rendered nonoperational over time as they are costly to maintain. 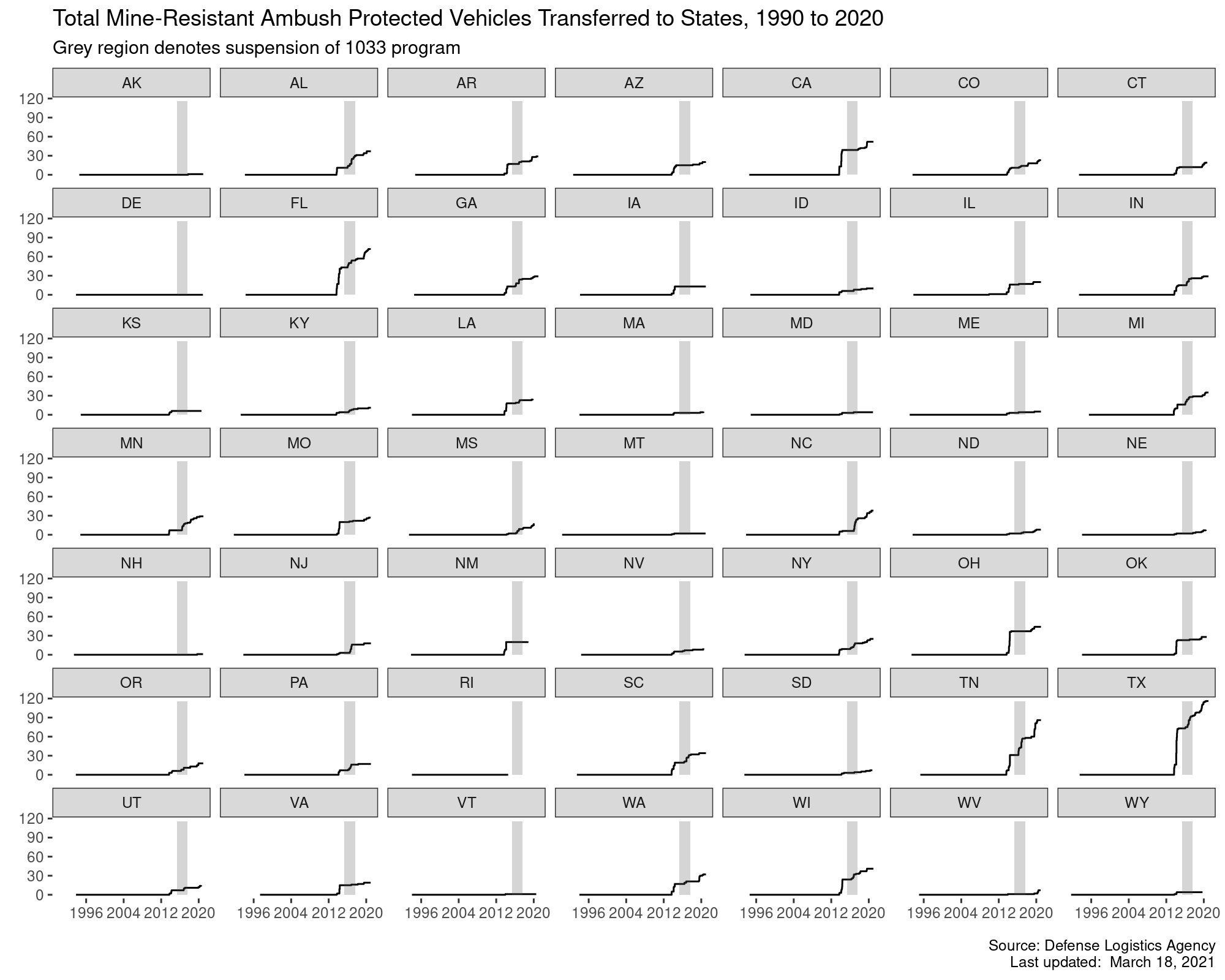 By 2020 only 3 states have not received a single MRAP (Hawaii is not included in the data from DLA, although the Marshall Project’s database records that the FBI has received 3). The grey band in each panel of the plot marks the suspension of the 1033 program from 2014 to 2017. While some states like Connecticut and New Mexico demonstrate a freeze in transfers during this period, others like Tennessee and New Jersey continued to receive multiple vehicles. To date, the state that has received the most MRAPs is Texas with a whopping 116 vehicles.

Thinking about the future

This isn’t a one-time issue limited to the current aggressive police response to peaceful protest across the US; it’s a longer-running issue and will continue to have consequences for marginalized people throughout the US. The police chief of Camden New Jersey made headlines when he joined protestors and marched with them. Prior to his tenure as chief, the city disbanded the existing police force and built an entirely new one from the ground up. Without this radical reconstruction, it’s doubtful whether the police would have responded with such constructive engagement. Changing the culture of police departments takes time, and we can’t lose track of that once the current story fades from the public consciousness.

To that end, I’ve set up this post to automatically update whenever DLA releases new data on transfers to civilian agencies. It will serve as a way to continue to monitor the ongoing transfer of military hardware to civilian law enforcement agencies.

I like to think of myself as pretty in-the-know when it comes to police militarization in the US. I study state-based violence and repression around the world, and I’ve been aware of increasing militarization in US police forces for over a decade now. I still learned something new while writing this post. The US MRAP program was inspired by the Casspir (see Guardia, Mike. 20 November, 2013. US Army and Marine Corps MRAPs: Mine Resistant Ambush Protected Vehicles. Osprey Publishing. ISBN 978-1-78096-255-9., p. 4), a vehicle developed by Apartheid South Africa based on their experiences in the South African Border War and Rhodesian Bush War, two anticolonial wars, making the MRAP a potent symbol of how tools used to police the empire abroad are eventually turned on a country’s own citizens at home.

You May Also Enjoy

I recently needed to create a choropleth of a few different countries for a project on targeting of UN peacekeepers by non-state armed actors I’m working on. A choropleth is a type of thematic map where data are aggregated up from smaller areas (or discrete points) to larger ones and then visualized using different colors to represent different numeric values.

In my research I frequently work with large datasets. Sometimes that means datasets that cover the entire globe, and other times it means working with lots of micro-level event data. Usually, my computer is powerful enough to load and manipulate all of the data in R without issue. When my computer’s fallen short of the task at hand, my solution has often been to throw it at a high performance computing cluster. However, I finally ran into a situation where the data proved too large even for that approach.

I’m currently compiling a list of university-affiliated programs designed to help prepare students for graduate study in political science and assist them in the process of applying to graduate school (a labyrinthine and opaque process in many regards). Since travel costs can be a deciding factor for some students when deciding whether to apply to these programs, I thought it would be nice to also put them on a map.